My weekends for last couple of months are turning out to be delightful. There’s a party, a movie night, Get together or be it a book. There’s always some new experience. And as McDonald says, I’m lovin’ it.
So this weekend started with two movies. Home Sweet Home, a Konkani movie and I, a Tamil movie.
First it was Home Sweet Home. The movie was released during Christmas time and I was yet to watch it. Twice I made plans and they failed at the last moment. But today, Maybe luck was on my side. I maybe the last person in Goa to watch this movie. But I watched it. (#AchievementUnlocked)

The movie revolves around John and Raj. (Chuck it yaar. You can’t even get creative at names? Same typical names from Hindi movies? Duh.) Moving on.. John is an NRI(like most of the Goan youth who don’t get past matriculation) who returns to Goa. Correction. Deported to Goa. He now wants to go back to his house (named Home Sweet Home), marry a girl and live happily ever after. Sounds like typical Goan. But his plans vanish in air when he discovers that his house has been replaced by a three storied building. It’s a magic trick, Courtesy of a builder named Shah. The rest of the movie is about how John puts up a fight with the builder to punish him for destroying his house and his dreams. 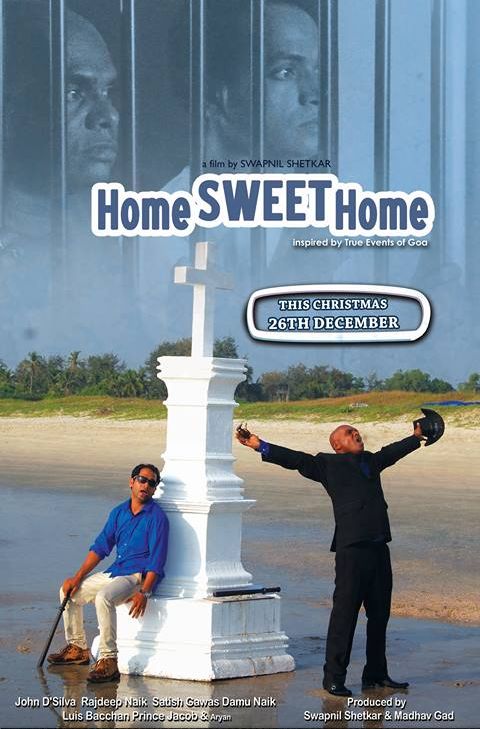 The problem with local movies is that they don’t get enough funding and they turn out to be movies made on handycam. This one is different. Decent amount has been spent on making this movie on par with mainstream cinema. Well.. Other than the cheap name for production house. Go Goa Gollywood. Really?? Are you effing kidding me? Why did you borrow a name from some cheap movie? (Go Goa Gone. If you fail to recall)

What I liked about the movie was a fresh cast. Most of the faces were new. At least for me. The story  is “hutke”. It deals with the problems of common Goans. When was the last time you saw someone make a film on this? (Oh right. Rakhtayug). Opening song is catchy. I need to grab it somehow. Just that song. The camera work is good apart from repetitive shots towards climax.
What I didn’t like about the movie was a rather dull second half. Throughout the movie, there are monotonous conversations. Long pauses where you want to stand up from your seat and scream “Kitem tari ulay mare C#$&$#%=&a”. And that reminds me of another thing I didn’t like. The swearing. Sometimes it’s muted and sometimes it isn’t. What the heck?? And on top of it is the ending. I’ll rather not talk about it.

But said so, I liked this attempt. Commendable effort by the whole team. I wish them good luck for the sequel (Oops! Does that count as spoiler?) May that film turn out to be better than this.  8/10 for Home sweet home.