It’s two months since the release of The Dark Knight. I was really eager to watch the film and just today I competed downloading it’s screener. It was pain as no one was seeding the torrent. I’ll keep that apart. I want to talk about the movie. It is much talked movie and now it’s my turn.

So it is Sunday. I wake up late and I am in fool mood of watching films. Add to it it was my mothers birthday according to Indian calender. She likes to celebrate it according to that. So it was four of us who enjoyed the birthday. On this occasion this dumbass just wishes to give her some more happy moments and she never have to take the smile of her face. I got to eat chocolate cake for this. 🙂 This was at night.

In morning I copied the file to pen drive and popped it into DVD Player. This film was Iron man. Lovely film. I thought superhero movies always do something sci-fi fights and related to saving earth and all the blah-blah. But These two films changed my view. The best moment in the movie was the one when Iron Man goes to Afghanistan and saves the local peoples. I never thought such moment will be there in any English film. This film crafts the story behind the weapons beautifully. It is the bitter truth. This film enters the list of best films I watched. 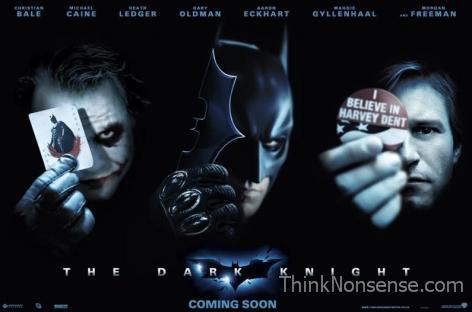 Then comes The Dark Knight. After watching first half an hour I had no idea why this received so high ratings. But as the film proceeds you got to know it. This Dark Knight is not ass. It is knight but it kicks you hard and still makes a place in your heart. The second half of the film is awesome. Nothing better than that. It’ll take some great efforts to have this much great second half. Joker is fantastic and it is not hyped. He is the real hero in the film. He is the life of the film. Dialogs are really good. Recently it was Rambo IV which had some great lines. After that this one. “Even the best against the evil can fall.” This was really good. I’ll be watching this movie again within this week. A must watch. I doesn’t look like the next Batman movie can catch this one.