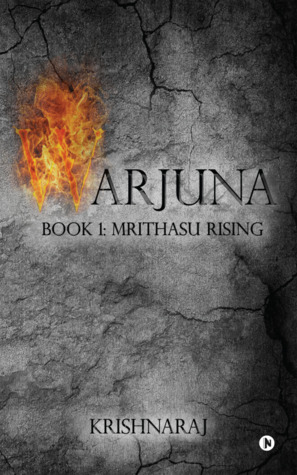 What can I say about this book? This book totally surprised me. I judged the book by its title and thought it would be just another retelling of Mahabharat or The life of Arjuna. I was wrong. This is entirely different story. Author has borrowed a few characters and their characteristics from the Mahabharat epic. The rest is a story which you can imagine to take place 1000-1500 years back.

The central character of the story is Arjuna, Prince of a kingdom Wagharr somewhere in the North West of Bharat. It is a small kingdom that belongs to Kingdom of Avanti. But they are not obliged to pay taxes to Avanti as Wagharr supplies mercenaries and soldiers to Avanti. Wagharr is supposed to be protected by the Shield of Hanuman. On a tragic day, Kingdom of Wagharr is attacked by a mysterious enemy name Hayacree. While fighting against Hayacree, Arjuna was given the task to move women and children’s to a safe place. This journey outside his kingdom changes his destiny. Or maybe, walks him towards his destiny.

The Pros:
The story, writing, characterization is captivating and keeps you glued to the book. Arjuna goes through a transformation from first chapter to the last chapter. He is almost a different character at the end of the book. The descriptions of different states, their capitals, their palaces makes it easy to visualize. The are not many fight sequences in this book in spite of it being a warrior story. But there is a lot of strategy and politics. which I feel hold key to the kingdoms.The fantasy elements are very well blended and not overdone.

The Cons:
Names. I don’t understand why they have to be so difficult. The author wanted to differentiate the story from the epic but he went too far with the names. You can hardly remember characters going from one chapter to another. I had turn pages back to lookup for the role of characters to understand. Second is some characters are introduced very abruptly. They jump in front of you out of nowhere and they are supposed to be major players in the story. Kamsa and Draupadi for example. Lastly, There is a history of kingdoms which has been provided at the end. This should have been the first chapter to make it easy to understand the story. If you want to read this book, Go through this history first.

All in all, This is well written book and totally worth your time. The last chapter has enough suspense to make you wait for the next book in this series.