I was waiting for this phone for last four months. Finally I bought it on Saturday. Now that I used it for three days, I can write a review. My earlier phone N72 was great. I miss that phone. I exchanged it for this mobile. Though this mobile is much better than N72, I still miss that phone. May be the moments I captured with that phone are priceless. Lets not drift to this. This review is my frank opinion as an owner and end user. I am not paid for this review at all. 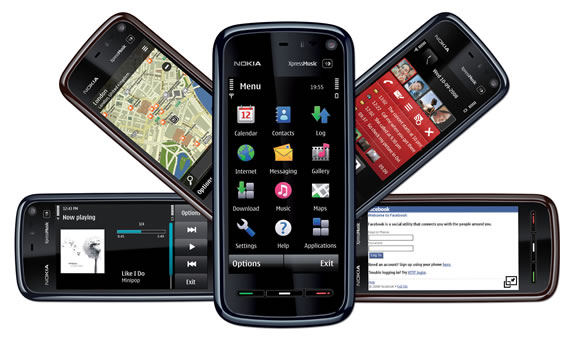 I opened the box and there was the beauty. The back cover is not as good as other Nokia mobiles. It’s difficult to remove and insert the battery. At least for the first time. Sliding cover would have been great. When I switched it on, It started fast. Faster than other Nokia mobiles with 1GB+ memory card. There are only three buttons on front. Receive, Reject and the white one for menu. No more buttons on front. Coool…

The next step was to insert SIM and memory card. Both can be inserted easily via slots provided on side. One thing I didn’t understood. Why there was need to provide a side slot for SIM?? This Sim cannot be removed without opening the back cover. So whats the use of the side slot? It’s better and safe within the mobile. About the memory card, It’s 8GB. More than sufficient for me. It already comes loaded with Hindi and English soundtracks. A special album “Connections” by A.R.Rehman composed just for this phone. But not a good one. Other songs provided are really good. About 200+ tracks.

Speakers are not loud as I expected. They sound a bit lower than N72. Sound is stereo and it’s really good on ears. You can enjoy music and movies. On some bass tracks they sound cracked at high volume. Not always though. Volume control is on side and easy to use. While playing song or movie, I wished a tap on screen would evoke the control. This doesn’t happen. When you change volume it displays a bar on screen and then you can change via screen.

Camera is 3.2MP.  Something which I don’t expect with such high end mobile. I wished it was 5MP at least. Anyways the photos taken were good and thanks to dual flash. You get good quality in low light also. Video recording is superb. Mind blowing would be perfect word. Videos are crisp and clear. Recorded at 640×480 and 96kbits AAC audio what else can you expect? You’ll surely love the quality. Video playback is also out of the world. You’ll love the quality here also. I was stunned at the quality of playback when I watched the “The Dark Knight” trailer and some travel videos. It’s time for amateur videos. 😀 On the downside the video gallery loads very slow. My screen just times out. Maybe it’s because of the .dcf license files for the music files which video gallery assumes as videos. This should be fixed. On the other side, the front camera is useless. It can be only used for video calling. That’s shameful. I cannot use this camera as there is no video calling facility yet with my network.

Bundled accessories are as usual. There is one protective plastic cover which I find useless. Bundled earphones are too good. I can feel the bass. There is an extension cord if you don’t like these and want to use your own earphones. Another one is TV out. I can watch all the videos recorded without the need of converting. With the use of USB cable provided I can use my mobile as USB drive. Just like other Pen drives. This saved my money. I was about to by 8GB pen drive.There is also an extra stylus provided, in case you lose one.

Now lets go to interface. Starting from the screen. I don’t know what’s wrong with Nokia. My N72 also had the same thing. They provide the mobile with a screen guard which has something printed on it. This makes it useless  and you have to peel it off for convenient use. Sadly, There are no screen guards available for this phone. I have to wait for some time. I find it uncomfortable to expose the naked screen to the dirty fingers and pointed stylus. There are already some scratches on screen. What if I had peeled of the screen guard? Looks like they have made some deal with screen guard manufacturers.

The user interface is good. But could have been better. There is lot of double tapping involved instead of single. That is annoying at times. There are two buttons on screen, for Contacts and Numpad for dialing number. There is a media key just below the front camera which invokes some useful shortcuts. Good innovation. Easy to use interface. Change time with touching clock. Change profile and a quick calender shortcut by touching the date. You can go back forward through photos with just a slide with your finger. Similar to iPhone. You may have some problem at start using the scroll bar by your fingers. You’ll get used to it after sometime. The stylus is good and I can convert all my handwriting into typed words. Very good Handwriting recognition.

On the software side, you get Ulead movie creator light edition on the miniDVD provided. I was disappointed not to see any office application. I was expecting Quickoffice with better features. The Calender I thought is better than the N72. Though similar, I find it easy to set notes and reminders. Games provided are Bounce and RT GR. Difficult to get used to. But they are fun to play.

Now for the final and most important thing. The voice quality is not good. It sounds low. Mic quality is good. I can judge that with the audio-video recording. Battery life is good. I was able to use it for two days while using it at par. Watching videos drains the battery very quickly. So watch out for that. It takes 90-110 minutes to charge the battery fully.

Overall you’ll love this phone. In spite of all the negatives I mentioned above. That’s the beauty of this phone. I am loving it..