Monkey and menace are synonymous words. I don’t have any doubt’s regarding this. One of the quickest animal on trees. Yesterday i saw a whole bunch of them. I work on a site which is located almost in the center of the city. In spite of that there are many trees along with the houses. The animal habitat is frequently being captured by humans. We are trespassing their areas and destroying them for our own needs. I see many boards which say “Trespassers will be executed”. Sadly animals don’t know to write. So they cannot make such boards. 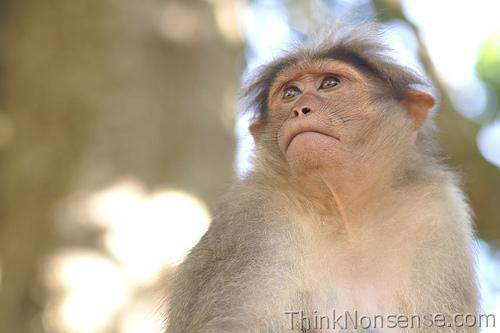 Now they are forced to move towards the cities and villages for the food. This is a big issue. Let’s  keep it aside for this post. Getting back to the topic, In search of food monkeys come almost at the doorstep. Some of them jumped over the slab under which I was standing. They don’t seem to have any specific food to eat. They were eating leaves of trees which are tasteless. I know this because I tried eating those leaves. What if in case I have to survive on these? I did this to answer the question.

There was a mango tree which was fruitless. The leaves taste good though and I can eat them. Especially the ones at the end of the branch. The smallest and new ones. There was also an almond tree. These are being planted in many places. I saw them for the first time in my school. I thought monkeys will eat them. But they hardly took anything from that tree. Conclusion: They don’t like almonds. I used to eat a lot earlier but now I forget to buy those.Within those monkeys there were baby monkeys. Some of them were attached to the chest of their mother. The bond of baby and mother at best.

Talking about monkey menace, I heard of it in many cities. It is very less on the site where I am working but in other cities mostly in northern India the menace is increasing. Monkeys are attacking men, women and children’s also. Still there is no perfect solution for the problem.Reviving the habitats of the monkeys is the only solution. But that looks to be out of question. I am now worrying  what if the situation in northern India  travels to Goa.That would be another dark spot. Monkey living in monkeys house..

Oh!! I forgot to tell you that there is a temple of lord Hanuman in nearby area. May be that is the cause of attraction.