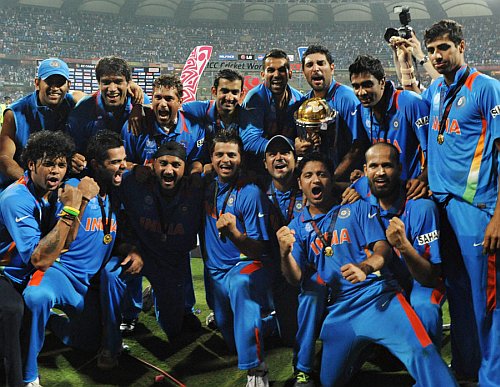 Second ball of 49th over. Dhoni hits a six and whole India erupts. Finally.. The wishes of 1.2 billion people came true. Yes.. India won the Cricket world cup 2011. 14 nations, 210 players, Almost 45 days of cricket action and it ends on a sweet note. Every Indian around the world will sleep in peace today. The rush, excitement, tension, pressure is all over. This is the time for celebrations. For many this may be a once in a lifetime moment. I don’t know whether this holds true for me. But this is indeed unforgettable moment for me.

The last time I posted about the world cup, I wasn’t that happy with the proceedings. It was quite a dull tournament in spite of being a World cup event of a sport. Since then, things started moving. Then they gained speed and momentum and reached a peak in the final. The second half of the world cup delivered memorable moments for cricket. My only disappointment was that England wasn’t able to make it to the finals. They produced the best matches of the tournament except the one which bought them ticket back home. Some say, the England players missed their family and wanted to go back home. Could be the reason for this shameful end.

The second half of India matches was filled with excitement. They played against the defending world champions Australia and arch rival Pakistan. I predicted the win against Australia as they are weak against spin attack. But the match wasn’t easy win. India fought hard and won the match. Then came the match of the tournament. The match which makes impact on the relation between two countries. The match which is the often called, “The Mother of all matches”. India Vs Pakistan. I just wanted India to win this match. I wouldn’t mind India loosing world cup but not this match. Our team looked far better than the Pakistani team. But it’s not your talent which decides the match result. It’s the ability to handle the pressure. This match creates heroes and villains. Heroes were born and India won the match.

Then came the finals. I have always tagged Dhoni as a lucky captain and I always will. He doesn’t have that talent or the skill which is often talked about. But his unorthodox playing style and decision making works for the team. And when you are a captain of Indian team, your own skill and talent won’t matter till you win matches for India. This final was different. For the first time ever, Dhoni played captains innings. For me, Gambhir is the person who deserves the credit of the win. Just like in 2007 T20 finals, He played a brilliant innings which got shadowed. Player of the tournament was deserved by Yuvraj.

After the 2003 world cup finals, My interest in cricket almost died. I hardly watched cricket. Very few full matches. That was because of the loss in that finals. They should have at least fought and lost. But someone said. If it doesn’t end well, then it’s not the end. This final is the ending I was seeking for. I was completely out of my mind. I jumped, danced, shouted after the victory. Something I didn’t do in many years. Everyone around me was happy. Strangers hugging and shaking hands. Smiles spread all over. Cast, color, religion didn’t matter. There is only one religion Cricket and Sachin is the God. I was very happy that Sachin finally fulfilled his dream of world cup. Players carried him over shoulder around the ground.

Tendulkar has carried the burden of nation for 21 years; It was time we carried him. – Virat Kohli

There is much more I can write about. But I like to stop abruptly.

P.S: The real reason behind India’s win is Rajinikanth 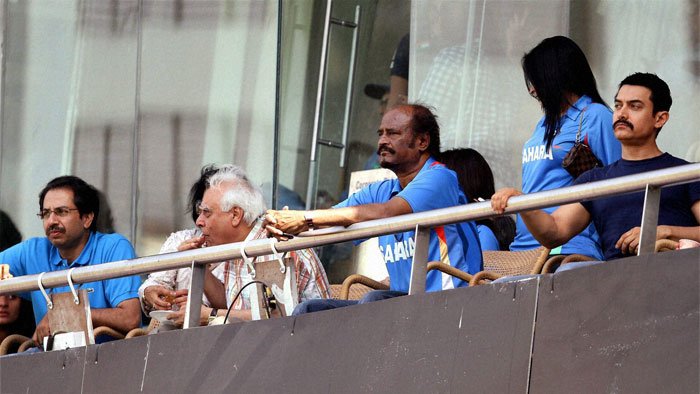 Thank God…. The so called biggest cricket extravaganza is over. Its a week since it’s over. I’m writing today because it was still in news even after the finale. It is said to be a huge success and has changed the cricket approach. the fast forward 20-20 games will soon replace 50-50. We don’t have time isn’t it?? So how will ICC get profit with our lack of time for things. but the, When there is a cricket match it’s like a holiday. You’ll hardly find anyone working in government offices.

The whole tournament lasted for 44 days and there were many controversies during the tournament. There were fights between team players. Someone slapped someone. Someone cried like a baby. The player doesn’t charge, but surprisingly the team captain does. Then the withdrawal of the charges. Mind you that the same players play for the country as a team. And now they are fighting here. As there is a saying. Controversies, Good or Bad, doesn’t matter. They are sure to get you in the limelight. Maybe tomorrow a celebrity will be in limelight for kicking a donkey. The donkey will get some limelight also. The confusion may be who is the donkey between two?? END_OF_DOCUMENT_TOKEN_TO_BE_REPLACED

Last time I talked about this and left the topic incomplete. And I don’t assure you to complete it this time. The last time I talked I said Cricket as a religion in India. And if it’s religion then Sachin is GOD. I thought of writing about cricket due to ongoing DLF cricket league. This is certainly heating up cricket fans.

This league started on 18th April. And I’m writing about this today. Almost 10 days later. Reason?? There is no reason for that. Just because I like to do things late and I’m a lazy person. You should call yourself lucky that you are reading this 10 days late. It could have been after the tournament. Let it be. Back to the topic.

The very hyped tournament made a good start and is gathering good crowd. It is also creating lot of controversies also. But these are necessary to get the limelight and selling of tickets. Cricket is going through a change that I don’t admire. The format of the games is 20-20. And there is no cricket involved here. It’s just murder of cricket. I see half-nude cheer girls, cheering after every wicket or boundary. I never expected such thing in India and in Cricket.

I cannot call 20-20 as cricket format. In this format there is nothing to play. Just get to the pitch and play with horizontal bat with as much power you can. That’s simple. I was amazed to see centuries being scored in 20 overs. And the balls taken for centuries were around 50 balls. There have been 200+ scores in 20 overs. There is rain or say tsunami of fours and sixes. This is certainly not cricket.

Why I’m talking about cricket when I don’t watch it much or don’t like it much. i don’t like cricket, But as a sports lover I love all sports. And don’t like things which removes the charm and the class of the sport. This murder of cricket will continue till 1st June. I watched 2-3 matches in my free time. Though eye soothing it was not worth watching.

Will continue writing about this..

Thats the end of the game.

I hope you understood what cricket is. Now to the topic title. Is Cricket a religion?? In India they say,

If Cricket is religion, Sachin*** is God.

Certainly here peoples are crazy about Cricket. They Eat Cricket, Sleep Cricket, Think Cricket, Talk Cricket. Whenever there is India’s match you’ll find Government offices empty. Or near a TV or transistor. Crowd gathered on street outside TV shops. As an Indian this dangerous disease once affected me. But thanks to 2003 World Cup Final. It’s perfectly cured and I’m fit now. But for Cricket fan’s I should be admitted to Mental Hospital. (I still wonder why I’m not there). But the problem with that disease is that its infectious. So in order to stay away from infection, I sometime watch matches which are on Sundays. So far so good.

You see. I just got away from the topic. But reading all the above thing, It is a Religion. Its a religion which unites whole India together. This religion is very powerful. You hit this sweet spot, cleverly of course, Then name and fame are your’s. Everything has its Pro’s and Con’s. Cricket is no exception.
I don’t want you to feel bored. Will continue this Nonsense some other day.