Change is coming.. All eyes are on America and the new US President Barack Obama. All TV channels broadcasting almost anything about Obama. Few hours back I saw a news channel broadcasting about “What Obama will have to give up?”. That includes things like cycling in public places, his hobby for swimming, His love for beaches, his blackberry and so on.. After watching that telecast I said to myself that I am not sure about the change that Obama will bring, But the change has already entered his life.

Focused by media as the “First Black President”, he is looked upon as a person who will bring change everywhere. Till date not a single President brought change it seems. The fact that he is black is the change. I am not sure that whole US has accepted him as President or was in favor of him. He got 52 percent of the votes. What about the 48 percent? That’s a close finish.

Why I am pointing towards this is because those 48 percent were not in favor of color change. I wrote a post just before election with title Black and White. It doesn’t seem to have worked. When you want change then majority should be in favor of it. This majority should be noticeable. The same situation persists in India where Congress rules in spite of bad governance. Change is always talked upon and never implemented.

I hope this is not the case with Obama. I don’t expect him to bring changes that will change the course of whole world within course of days. What I expect is slow, steady change and positive change. Looking at his support, I am pretty sure that he will be re-elected again after four years. Everyone is against war and that was prime reason for hate for Bush. There are problems which have to be solved by war and war is the lone solution. Then take this as the last option. Don’t hesitate. Take hard decisions that will surely benefit although you may have to face opposition.

Wishing him the best….

Let the change, change everything…

After the US election there is a wave of change. Everyone wants change in one or the other thing. They want to get rid of the current situation. Common man voted and elected Obama for the change. Now check this guy. He wants a change too. Everyone is Obama-maniac. As for this guy, he already has some change with him. 😆 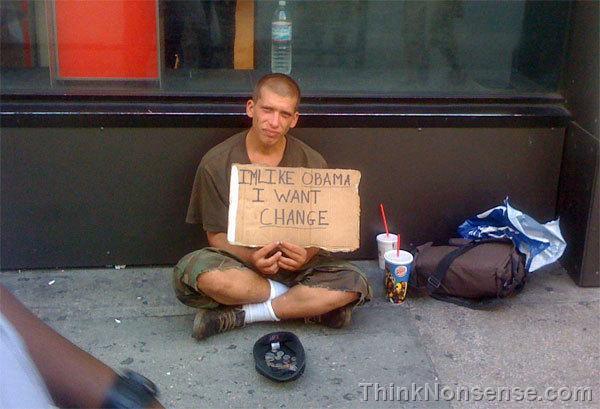 Some days or months later US will be saying this and so do some peoples in the world.

I have started digging and am doing it seriously. It’s a great way to get some good stuff and good friends also. Almost all bloggers know what is the power of digg and what it can do to your blog. So some crap(including the contents of my blog) is digged into this network. The best way to get noticed is to create controversies. I hate the ones which are really unnecessary. Here is one of them.

While digging across I found this story. I was stunned. How can one make a survey of such thing?? They didn’t had any other question?? Why color of Jesus? Why god is also pulled into this “color” thing? I am a Hindu by religion and have faith in god. At the same time I think there is only one god above all religions. It hurts when someone tries to differentiate it based on color.

There are 33 crore god characters in my religion. Everyone has something unique. Some are black, some are blue, some are “white”. But they are praised with just the feeling to pray. The reason to pray may be different. Till date I never heard of single incidence where there was an argument like “Lord Krishna is white and not blue” or “Goddess Kali is not black”. We have fear for our god and that may be the reason behind this.

This is really cheap publicity just to create controversies and get hits. Such cheap things should be stopped. Unknowingly I digged this article instead of burying. Now i am thinking of creating controversies on current hot topics. How about a controversial link between Barack obama and Sarah Palin?? That will sell like a hot cake. Someone do it. Let me be clean.

If at the end of this post you are stil thinking of what color is Jesus then close your eyes and let your heart see him.