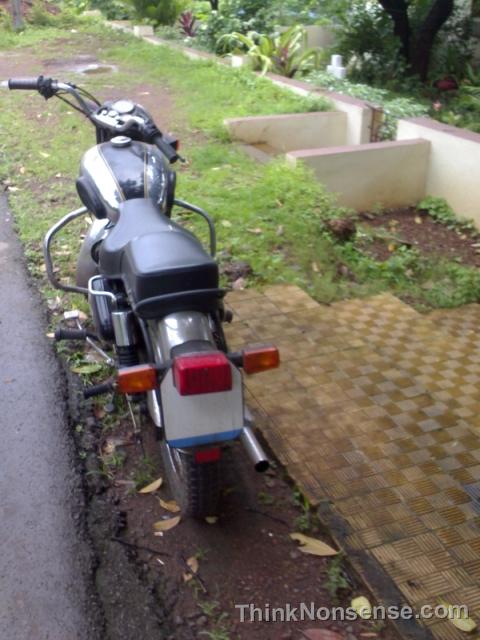 Rules :
1) One entry per user, per blog. Don’t use multiple blogs as separate entries.
2) Caption may contain humor or may not. In the end best will be chosen.
3) You should have an Entrecard account for the winning prize.
4) Entries open till Sunday 23:59 UTC
5) Winner will be announced on Monday.
6) At least ten entries are required to decide winner.

Winner gets 400ec !!! So what are you waiting for?? Suggest a caption and make the Picture talking.

I made some changes in my blog. They are minor or negligible but thought of writing about that. I removed the “Recent Posts” lists. Somehow I found that it didn’t made any sense putting there. (Oh….. When did I start thinking sensible??). The front page loads with five entries and “Recent Posts” with eight entries. I could have changed the number of entries but I thought it’ll make sidebar looooooooooong. This means now you have to click at bottom for previous entries. Till date I never noticed it’s written as “Next Page”. But that’s ok. I’ll change that.

The second thing was to show the number of posts along the category name. That will show how active(????) I’m in particular category. I need to improvise on “Free Web Hosts and Windows Tips and tricks”. The “Marathi\Hindi” category I’m stopping completely. I made a separate blog for that. But I’ll retain those posts here. The change will remind me where I’ve to post more. Yeah I forget that sometimes.

The third change was introduction of archives. The “Nonsense Archive”. That will show How much I post every month. So far so good. I’m able to post 30 posts per month. Thats a good sign. Moreover I may get some hits due to the size of archive. Many times when you see the archive contains good number of posts you start reading posts with a bit of interest. At least i do that.

Now have to wait and watch the results.

Sometimes I wonder what kind of person I am?? Do I know what I want?? That sometime usually occurs when I end my job. And today was that day. I joined this contractor a month ago. The salary was fixed on first day. He agreed on it and I was happy too. The job site was not far from my house. Around 2 Km may be. I was able to have my lunch at home during the lunch time. And was doing great.

There were site problems. The labors were not skilled. I was expecting that they will know something. But I was having hard time explaining everything more than 2-3 times. But I didn’t mind that. That was my job. I had to look in for everything and due to simultaneous locations I was unable to concentrate on one thing. And there were some mistakes made.

As a professional I took my responsibility for them. But soon whatever used to happen was pulled on me. I was working harder and harder to make things right. Actually I was loving the amount of troubles I was getting. That may sound weird but true. That makes me feels that I’m doing something. And all was going well for me till yesterday which was salary day. I was shocked when I didn’t receive the salary fixed. He held me responsible for some problems and told me that I’m not worth that much. And that hurts!! that really hurts man!!!

I couldn’t control my feelings and left the job. My heart says I did the right thing. Since I’m mindless there is no question of that. But there is something in my head which makes me think. I don’t know what it is. That thing asks me question. Did i did the right thing?? My heart is like a butterfly I feel. It’s not stable and keeps moving from one flower to another. But the sudden drop of this job created something called frustration in me. And I’m trying to take it out. I’m searching for a good FPS to do the killing.

Now in search of next job…
Thanks for reading my nonsense. I had to express it to someone…