The second movie I watched this weekend was one I have been waiting for last 15 days. That is since the day I watched the trailer of the movie. The movie is “I“. There was a scene where the hero bears the look of someone from Planet of the apes. That caught my attention. Though I was disappointed that the look is only limited to one song. 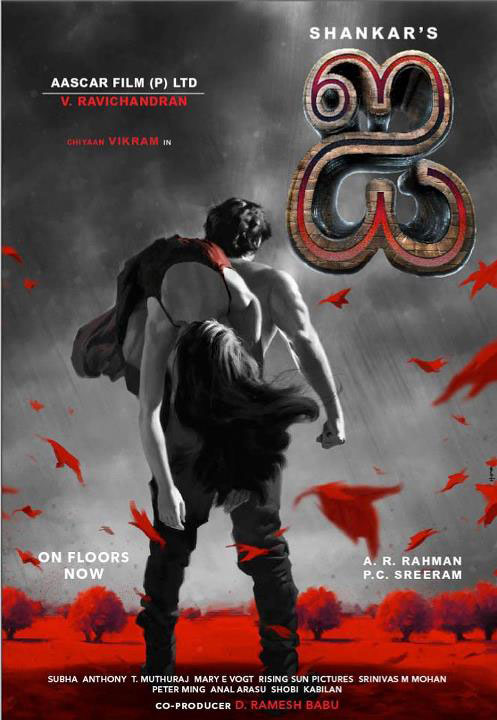 Our hero, Lingesan who later gets a fancy name Lee, is a huge fan of Arnold and runs a gym with his name and photo. He is also a huge fan of Diya, an ad model. He is so crazy about her that he collects every photo of her wherever his eyes catch one. He even buys every product for which she is modeling. Even bras(which his mother uses for cooking idlis. Whattay jugad!!) . And sanitary napkins. These Tamil guys are crazy fans. I love this about them.

“Coincidentally”, Our hero gets an opportunity to get close to her as her security guard for a shoot. Diya.. Mannnn.. She is one damn hot chick. I bet you’ll be romancing with her in your dreams at least the night you watch this film. (Focus man. Focus on review.) So Diya is “Not that type of girl”. And her humility flatters our hero. Now he sees her everywhere. His Nokia phone, Royal Enfield bike, Dumbells and even his sprouts. Just imagine Diya dressed like above. Crazy huh..

Then comes the villain. John, who is coupled with Diya in most of the ads, wants to have dinner with her followed by some “fun”. But since Diya is “Not that type of girl”, she refuses. This is when John uses his influence and replaces her with a model who agrees to have “fun” with him. Devastated Diya falls into depression until “coincidentally” she finds an ad on a local newspaper featuring our hero for a local product. (This is why my friend, You should read local newspaper. It may provide you with much needed solution.) Then Diya and Lee go to the land of Bruce Lee for an ad shoot.

The Good
Diya, I mean Amy Jackson. She is SUPER HOTTT! She is stunning in every costume she wears. She looks beautiful when she is wearing Indian dresses. Secondly, Vikram. He’s got the body of Arnold with impeccable acting skills. Third, Locations and Camera work. The scenic China has been captured in such a way that it pleases the viewer. You won’t let your eyes off the screen because of this. (And because of Amy Jackson). Fourth, Special effects. Do I have to mention this? It’s a Shankar’s film. It will have special effects using latest tech to blend with the movie.

The Bad
The ads. Though they are innovatively used in the film, they irritate you because of the screen time they consume. Secondly, songs. A couple of unnecessary tracks as usual in any Indian movie. Third, duration. Refer one and two.

The Ugly
Lingesan with that “bubbly” look. And then later in second half, his victims. They are UGLY. You want them out of  your sight. That says about the skills of the makeup artists.

Conclusion: This movie is total entertainer. Action, romance, Drama, Special effects, Hot chicks. It has everything. It’s worth every penny.  8/10