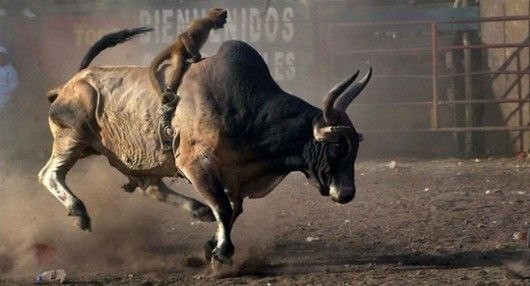 Good times, Bad times… They come and go. You never know when you’ll face one of them. So what should you do is be prepared for both of them. When everything is going good, just be prepared for some unusual situation that may arise. Don’t keep reminding yourself of that or else you’ll spoil the good time.

What I can say is most of us are not prepared for bad times. We always assume our time will be good. You never know… Then you fall in a situation like below. Tell me what you would have done in such a case? 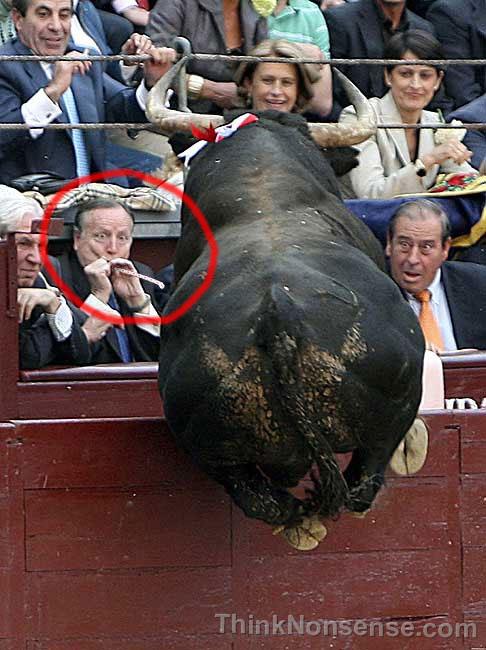 Those with weak heart would get an attack. The man in the circle surely looks the type I am talking about. Eyes wide open and a big O of mouth. At least he is still there. Many disappear after such a situation like they have got power to be invisible. Disappeared in a flash….

Till you fall in such a situation… :tongue:

When cattle are crossing, if the old bull swerves, they all go swerving following the lead. So among men, if he who’s reckoned best lies not right, much more do other folk. If the ruler be unrighteous, the whole land dwells in woe.

That is exactly what is our government. The leaders are like bulls. They have powers and they go mad. They hit, they run, they kill. Under the fear of those we vote them again and bring them back to rulers. The cycle continues. Since the leaders are mad, we also go mad. We also do bullish thing and it includes bullshit. We don’t think and we don’t have anything to think for. Just follow the thing that leaders does.

No one want’s to break the cycle. Someone has to control the bull, There is no cowboy here. The species is rare. Cowboys can handle all types of bulls. Once a single bull, a single old bull, is in control then the ones surrounding it come in control without any effort. It was good to see in current US election that there is a big change. Now that cowboy should control the bulls.

Situation is getting worse in many countries. Some have started slaughtering the bulls. That is not a good choice, but you have to go through that phase once they are out of your hands. I can only hope for more cowboys to come front. Can I be one???

A little bird was flying south for the Winter.It was so cold the bird froze and fell to the ground into a large field. While he was lying there, a cow came by and dropped some dung on him. As the frozen bird lay there in the pile of cow dung, he began to realize how warm he was. The dung was actually thawing him out! He lay there all warm and happy, and soon began to sing for joy. A passing cat heard the bird singing and came to investigate. Following the sound, the cat discovered the bird under the pile of cow dung, and promptly dug him out and ate him.

A turkey was chatting with a bull. “I would love to be able to get to the top of that tree,” sighed the turkey,”but I haven’t got the energy.” “Well, why don’t you nibble on some of my droppings?” replied the bull. They’re packed with nutrients.” The turkey pecked at a lump of dung, and found it actually gave him enough strength to reach the lowest branch of the tree. The next day, after eating some more dung, he reached the second branch. Finally after a fourth night, the turkey was proudly perched at the top of the tree. He was promptly spotted by a farmer, who shot him out of the tree.

Moral of the story: Bull shit might get you to the top, but it won’t keep you there.

Getting to the top isn’t an easy job. You have to go through the bull shit these days. But that’s a shortcut. You can just jump over the bull shit or choose a different way. Going through bull shit will get you quick success. But after sometime the smell of the bull shit will throw you out. That success will not last long.